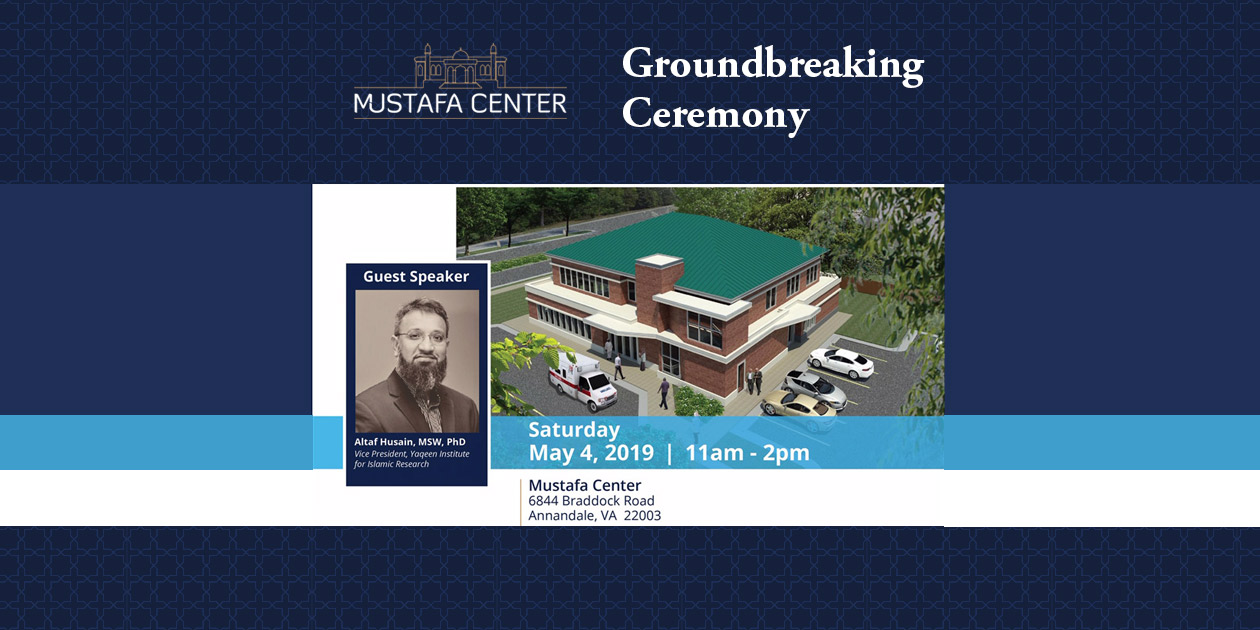 On Saturday, May 4th, 2019, Mustafa Center held the groundbreaking ceremony for the construction of a funeral facility to serve the Muslim community in Washington, DC metropolitan area.  Although the DC metro region boasts more than 300,000 Muslims, there is not a proper funeral facility to serve the needs of the growing community.  The Mustafa Center Funeral Facility, which is planned to be constructed across from Mustafa Center in Annandale, VA, is a state-of-the art facility, giving Muslims an opportunity to bid farewell to their loves in a dignified manner based on Sharia compliant Islamic traditions.

Plans to build a funeral facility started in 2012.  In the last seven years, the Mustafa Board of Directors and the community in general have gone through countless challenges and red tape to secure the construction permits from Fairfax County, facing local opposition and hoping to raise enough funding for the project to commence.  By the grace of Allah, the community celebrated an important milestone, the groundbreaking ceremony which marked the kickoff of construction of the funeral facility.

The funeral facility will have capacity for nine bodies (mayyet) at a time.  In addition to washing deceased bodies in Sharia compliant manner, the establishment will provide additional services such as grief counseling to families, coordinating with cemeteries for grave site arrangements, and assisting in obtaining death certificates.  The funeral facility will contain comfortable visitation lounges, offices, waiting hall, conference room, prayer hall, and a spacious parking lot.

Dr. Altaf Husain, Vice President of Yaqeen Institute for Islamic Research and the keynote speaker for the event, commented: “When our parents came to United States, they didn’t think they would stay in the country for too long, and waited for the right chance to return to their countries.  As years passed and it became clear that United States was our new home, we build mosques and schools, but we still don’t’ have a large and modern funeral facility.  The construction of this project will not only meet an important need of our community, but will further strengthen and establish our community in United States.”

The groundbreaking event drew strong support from various Muslim organizations in the area.  In particular, the following community leaders were in attendance, and pledged their financial and moral support for the construction of the project:

During the ground breaking ceremony for the Mustafa Center Funeral Facility, the Mustafa Center Board of Directors launched the “Brick Campaign,” where community members can sponsor a brick for just $48 towards 54,000 bricks needed (or $2.6M) to complete the construction of the facility.

Mustafa Center is a 501(c)(3) nonprofit organization. Donations are tax deductible to the extent allowed by law. Tax ID: 384061734